Anderson Manufacturing has been producing high quality AR 15 parts for nearly 30 Years. There is no doubt of their love of America, and its rifle the AR 15. Many people have dubbed the AR in AR 15 “American Rifle” and if it’s built at Anderson Manufacturing, I would have to agree.

Is Anderson manufacturing still in business?

Yes, and they are expanding their operations. In fact, in January 2020 they introduced their all new lineup of uppers and rifles that were newly designed with the M-Lok mounting system. This allows for easy accommodation of the M-Lok attachments and accessories previously not accepted on previous versions of the Anderson Rifle.

Not only is Anderson Manufacturing still producing AR 15 parts and rifles, they have even expanded their production to include a new 32,000-square-foot barrel making facility on the company’s campus in Hebron, Kentucky.

It is equipped with 9 CNC machines run inside 4 separate robotic cells, meaning the barrel facility is is the only fully automated barrel production line in the United States. This dedication to perfection eliminates human error ensuring meticulous exact repetition of flaw free barrels.

Is Anderson manufacturing any good? 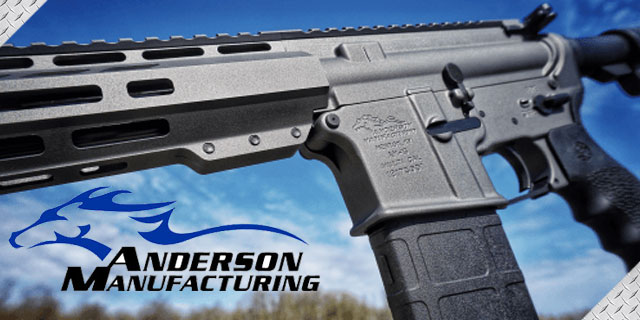 Let’s take a close look for ourselves at the facts, rather than just looking at speculation. Anderson Manufacturing

For over 30 years now Anderson Manufacturing has been delivering exceptional performance, reliability, and value to their satisfied customers. Can you buy a more expensive product? Sure. Can you buy a fancier product? Sure. But for value at the price point, you simply won’t beat Anderson Manufacturing. began and remains 100% American Made. They simply refuse to use anything but the highest quality raw materials. The company boasts the most advanced. Proprietary technology as well as the most stringent and industry leading quality control measures both in and post processing.

Yes, Anderson Manufacturing AR 15 Products are all designed and machined to be Mil-Spec. That means that due to the strict quality measures during production, you can count on “drop-in” installation of all Mil-Spec components with those produced by Anderson Manufacturing. They not only machine their aluminum components from high-strength 7075-T6 forgings to Mil-Spec, they also hard-coat anodize them to Mil-Spec for extended durability.

By keeping the manufacturing of the rifle, pistol, and parts in-house, they are able to continue to offer high quality, American made products at affordable prices and boast a limited lifetime warranty.

This is a quick and simple story, that needs to be told. Every AR owner should know this so they can understand a little bit of the history of the rifle and its close relatives. Like most everything in this country, it boils down to money and ownership of an idea.

In the early 1950’s the Armalite Company designed the first lightweight semi-automatic version of an ArmaLite Rifle, which was intern a scaled down derivative of Eugene Stoner’s AR-10 design. Due to limited success with military contracts, the ArmaLite Company sold the patent and trademarks to Colt Manufacturing Company in 1959. In 1977 after Colt’s gas operated bolt and carrier system patents expired, they only retained the “AR-15” trademark and designation.

Many if not most other gun manufacturing companies began mass-producing the popular style of rifle. Because there were so many near identical designs of the ArmaLite rifle, the term AR-15 became the generic term for any semi-automatic weapon stylized after the modular design. Of course, the party cannot go on forever without issue.

In 1994 the assault weapon ban that specifically outlawed the “AR-15” left room for all other manufacturers to re-name and re-brand their versions of the versatile and modular weapon. Thus, Bushmaster released the “XM-15”, Smith and Wesson the “M&P-15”, and DPMS the “A15”. Not wanting to be shunned from their own party, Colt released the “M-15” essentially the same exact thing but rebranded as something different.

So, essentially the M-15 is an AR-15 and so it goes. Keep in mind that most weapons that mirror the ArmaLite original share many of these characters:

What is Anderson Manufacturing Most Known for?

Some used to refer to Anderson Manufacturing as the “poverty pony” because they were once having a run of trouble maintaining quality control during the first major surge of production. Since then, however, they have been battling to overcome the unfortunate nickname head on with unparalleled success.

Besides having the first and most state of the art all automated human-free robotic barrel making facility, they have also developed a proprietary technology to develop the world’s first no-lube rifle.

That’s right, there is no need to ever lube any Anderson Rifle that boasts the RF85 nano-technology treatment. The RF85 process permanently injects calcium into the molecular fabric of the metal. Why is that important? Because it reduces friction by 85% while forming a protective barrier. Which means that clean-up the parts is simply soap and water, with absolutely no need for any lubrication.

Check out the complete lineup of Anderson Manufacturing AR 15 Products.