The AR 15 is an easily upgradable rifle platform. One of the often-overlooked upgrades is the trigger and fire control group. While it is true that the trigger does not directly affect the overall accuracy of the rifle it does affect the consistency and feel of the weapon. In truth, it is one of the most obvious and critical interaction points between the shooter and the rifle. How the trigger works can have a major effect or impact on the grouping of the shots fired by the AR 15 operator.

Just replacing the trigger will not make the rifle more accurate. There are many factors involved with accuracy, but when it comes to consistency, a reliable and consistent trigger pull can play a major role. Often rifles are only a few pounds and being held steady by the shooter, so the pull of the trigger can affect the overall movement of the rifle and affect the time between shots and the tightness of the grouping shot placement.

If you are looking to make a small investment into your rifle that you want to make a big difference, an upgrade trigger can be your sweet spot. Find out more about triggers and fire control groups in the article below.

What are Drop-in Trigger Groups? 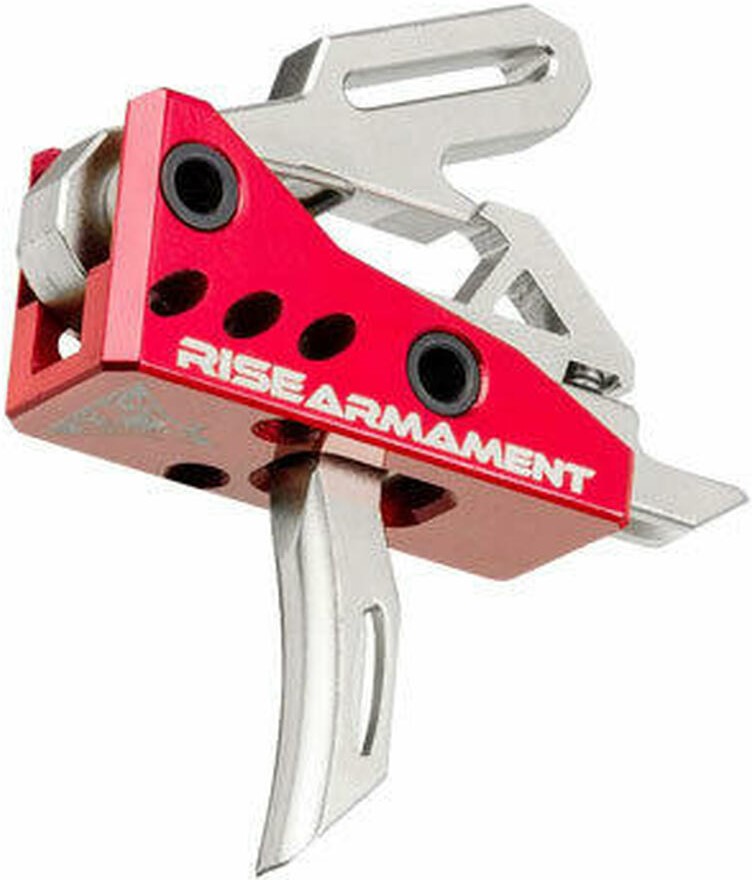 A drop-in or modular trigger group is a one-piece unit that houses all the components in a fire control group. It makes installation and removal simple and easy. Because you simply drop in the one-piece module and secure it rather than installing four separate parts. You just place it in the lower and slide the two pins to hold it in place.

Typically, these are more expensive than a FCG that is sold as a four-piece kit, plus pins. You may be thinking who cares, I never plan to remove the trigger once installed. However, you will soon discover when cleaning your rifle, it will be much easier to disassemble, clean, and reinstall the parts with a drop-in trigger group.

What are Different Weights for AR 15 Triggers?

The weights associated with triggers measure the “trigger-pull.” The trigger-pull is the amount of force necessary to be applied to the trigger to have it release and fire the weapon. It is well known that the more force needed to pull the trigger, the more movement created and less consistent the shot fired.

Trigger pull is measured in pounds of force and can vary greatly. While Mil-Spec varies when it comes to trigger pull, the most common weight is 5.5 to 8.5 pounds per pull. However, civilian AR 15’s can have trigger pulls ranging from 2.5 to 8.5. With some three-gun shooters opting for even lighter pulls.

What should you opt for if you are starting out? A mid-weight pull in the 4.5 range is a great place to start. Of course, it will also depend on what you are doing with your rifle and how it is configured. So, consider trying out a few rounds at your local range with a few loaner rifles and ask what the trigger pull is so you have a good base line to compare from.

The lighter the trigger pull the easier it is to squeeze the trigger to fire the round. This means it requires less effort and possibly less movement. Which could result in a faster recovery and tighter grouping in less time. The thing to remember is the lighter the trigger-pull, the more likely it is to accidentally discharge the weapon. This can be by total accident or by “doubling.” Meaning you fire one round, and the recoil of the rifle causes you to bump the trigger and fire a double or second round unintentionally. The best use for very light triggers is for competitive shooting matches or long-distance shooting where a hard trigger pull can make a larger difference.

What is Considered a Hair Trigger?

Technically speaking as it applies to an actual trigger, it is a gun trigger that has been adjusted to allow the firearm to be fired by the slightest pressure, as though only a hair touched it. It makes for firing the weapon the easiest possible but could create the opportunity for accidental discharge of the firearm.

What is included in a Fire Control Group? 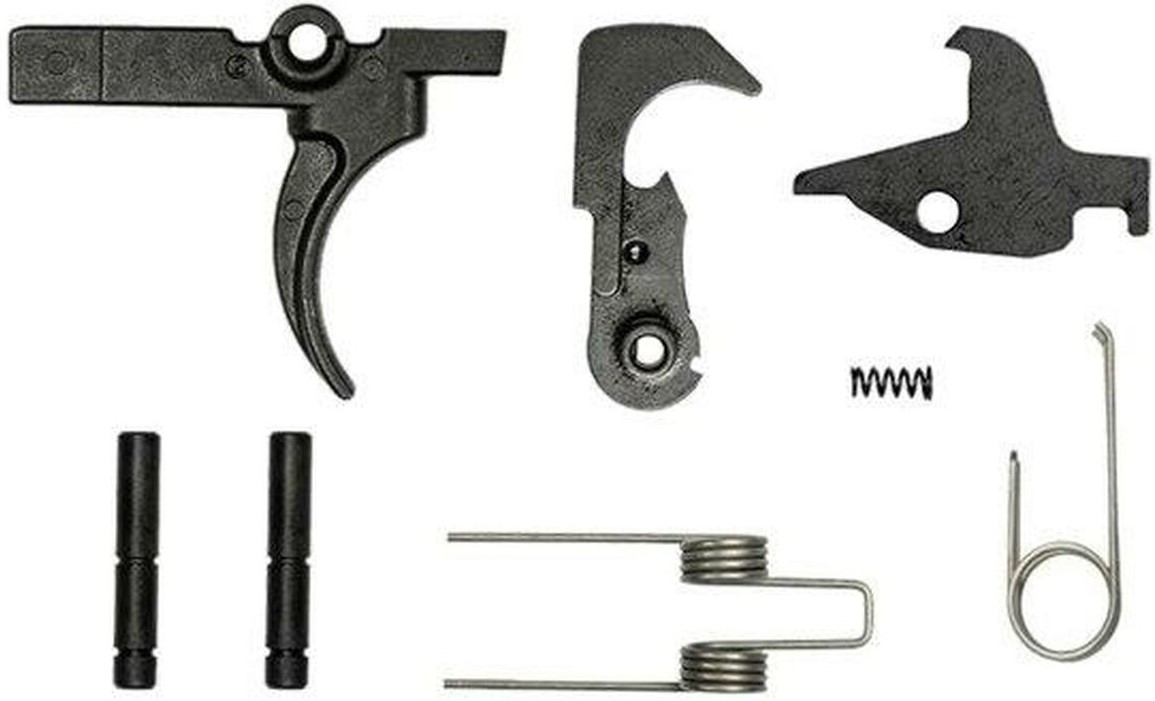 The fire Control Group or FGC is the name of the group of parts that fire the weapon. It is the group of parts consisting of the trigger, hammer, disconnector, and sear. Most likely it will also include a safety selector and switch. These parts can be individually grouped as a kit or set and can also be sold as a single module drop-in part.

What is an Enhanced Fire Control Group?

An enhanced fire control group is one that is polished or treated in a very smooth finish in order to make the pull of the trigger very easy and smooth. It may also have a shortened or adjustable reset feature as well. It removes the sometimes-gritty feel of a standard mil-spec fire control group.

It is important to note that it is strongly recommended to use your fire control group as purchased. Meaning do not attempt to polish, modify, or tamper with a fire control group. Any attempts to make a FCG work differently can cause it to fail and misfire or discharge accidentally. It may slip and fire multiple rounds or even stop working altogether.

What is a Single Stage Trigger or Fire Control Group?

A single stage trigger is one that only requires one range of motion to pull the trigger to release the hammer. It is the simplest trigger to understand and use. You squeeze the trigger it releases the hammer and fires the weapon. It is said to have a crisper break, when pulled. The reason is there is no resistance felt from the first stage before engaging a second stage.

The majority of shooters prefer a single stage trigger for most applications. Opting to save the 2-stage triggers for specific tasks. Such as distance shooting.

What is a 2-Stage Trigger or Fire Control Group? 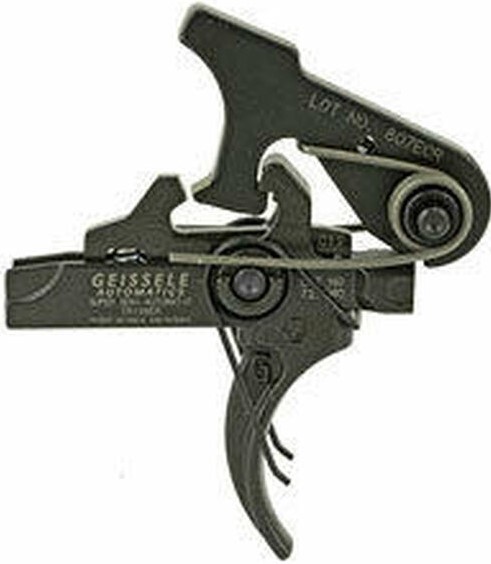 A 2-stage trigger requires the shooter to pull the trigger until it hits a “break wall” or stopping point between the first stage and second stage of the pull. The benefit of having the break wall is that the shooter knows exactly when the rifle will fire. This type of specialized trigger is primarily used on a DMR (Designated Marksman Rifle) or a marksman style bench-rest rifle.