What is the device on the end of a barrel for, what is it called, and is there a difference? There is a wide difference in muzzle devices, and we will go over them here. Very often people do not realize there is as much difference in types, functions, as well as looks and prices.

While there are special devices such as silencers, we will not be discussing those here. We will however be looking at the differences, similarities, pros/cons, and purposes of the three most common devices found on the end of most AR 15 Barrels. The Muzzle Brake, the Compensator, and the Flash Hider (or Flash Suppressor). 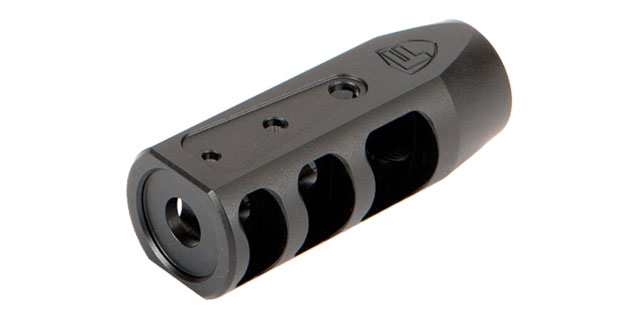 Most muzzle brakes often direct gas toward the sides. This makes for shooting with them for range nicer. But because they port to the sides, they direct the concussion and blast toward anyone standing in the vicinity. Because they are often extremely loud, they are poor choices for tactical engagements, shooting indoors, or shooting in close proximity to others.

While very similar and often mistaken for the same thing, a compensator performs similarly to a muzzle break. Both dispel high-velocity gas through ports designed to redirect it for a purpose. A compensator’s primary function however is to use the gas specifically to cut down muzzle rise.

To this end, compensator vent ports are designed to direct gasses upward. This “pushes” the front of the barrel down against the muzzle rise experienced otherwise. A compensator is a fine choice when shooting from a prone position low to the ground when stealth is not an issue. Because the compensator directs propelled gasses upward and not down, the chances of a dust cloud being kicked up are minimized. While sound suppression and flash suppression are uninhibited.

Speaking of suppressing the flash from the barrel end, a flash hider or flash suppressor is designed to disrupt the gas cloud as it comes into contact with the ambient air. Often by creating turbulence and mixing the extremely hot propulsion gasses with cooler ambient air, it minimizes the flash that can occur with other muzzle devices. Because the primary function of a flash hider is to reduce or eliminate the flash from the rifle end when fired, it acts to assist in the shooters position staying hidden form enemies when used at night.

For this reason, some states have decided they do not want civilian or citizen shooters using these suppressors to remain hidden while shooting. Many states including California, Massachusetts, Maryland, New York, and New Jersey, have existing bans in place restricting the use of and muzzle device that suppresses the muzzle flash. So be sure to check your local jurisdictions before deciding on a muzzle device for your next build.

What is the Best Muzzle Device?

Considering there are now a long list of hybrid AR 15 muzzle devices to choose from, you can get the benefits of more than one style in the convenience of having just one device on the end of your barrel. The options are nearly endless. Once you choose the function of the device you then must choose the finish and treatment options. You can have a matte black, shiny chrome, stainless steel, or a glossy black nitride treatment just to name a few of the popular ones.