Magpul Industries Corporation is an American company that specializes in design and manufacturing of high-tech polymer and composite firearm accessories. Richard Fitzpatrick originally founded the company in Boulder Colorado in 1999. But in 2013 when Colorado proposed a magazine capacity law that would make many of the company’s products illegal, Magpul relocated its production facilities to Wyoming. They strategically relocated their corporate offices to Texas where they have remained.

Magpul Industries is the division of the company that manufactures firearm accessories. Their other division of Magpul was originally founded in 2008 as Magpul Dynamics but soon changed to Magpul Core which provides firearms training and produces instructional videos.

What Happened to Magpul?

As mentioned, before they were forced out of their home state by the passing of magazine capacity regulations in Colorado. They were forced to relocate because the new law would ultimately make many of the products that made up a large share of their profits illegal. They had no intention to stop production, so they moved production to Wyoming.

Where are Magpul Parts Made?

The production facilities for Magpul Industries that manufactures the AR 15 parts and accessories is based out of Wyoming. Although they also produce educational and instructional video training and have their corporate offices located in Texas.

What are Moe Gun Parts?

MOE stands for Magpul Original Equipment and is their line of firearm accessories designed to provide an economical alternative while delivering a high-quality to be used in place of standard weapon parts. The MOE line is distinguished with a simplified features but maintains Magpul ergonomics, engineering, and material quality. Many of the parts are made from Magpul reinforced polymer construction that has a lighter weight while maintaining durability.

What is AR Magpul?

AR Magpul is slang industry terminology. It refers to the Magpul lineup dedicated to the AR-15/M16 Platform. Magpul Industries manufactures their own design of innovative and high-quality AR 15 platform accessories including M-LOK, PMAG, MBUS, Hand Guards, Grips, Slings, and Buttstocks.

What does PMAG Stand for?

Does the Military use PMAGS?

The quality, reliability, and durability of the PMAG did not go unnoticed by the military. Several militaries have contracts with Magpul for their PMAGs. They are lightweight and are less corrosive that their metal counterparts. Soldiers in the Marine Corps have used PMAGs in their weapons even in combat for many years. In 2018 the Marine Corps Systems Command released a message which officially authorized the PMAG (Magpul polymer magazine) for use in the M27 infantry automatic rifle as well as in M16A4 rifle and M4 carbine. 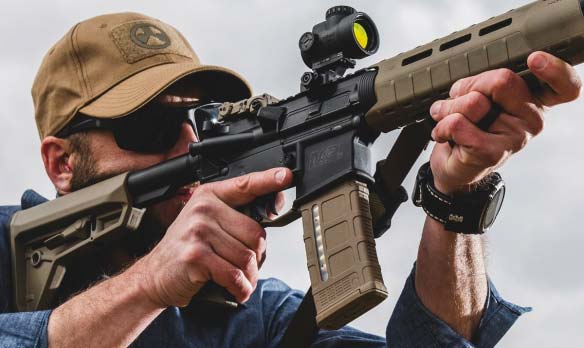 All of the Magpul MOE lineup has been proven to be reliable, impact resistant, and high-strength, and as such high-quality, especially for the price. But the lineup of one of their flagship products the PMAG is becoming legendary. With the introduction of the Gen M3 Series designed for any STANAG 5.56 Weapon. What does that mean? It means it will work in just about any 5.56 Stoner family of rifles you have in your bag. Such as the AR-15/M4/M16, as well as the SCAR-L, the HK416/M27 IAR, some models of the AUG, and the SA-80.

Just an added note about Magpul, they boast a 100% made in America title. That means they use only American made parts and accessories to produce their products, that includes the fasteners as well as the screws. Yeah, you are going to pay a little more upfront, but you will not have to pay again in frustration for buying sub-par products.

Is it OK to Keep PMAGs Fully Loaded?

Yes! That is one of the design features of the PMAG. The reason that previous generations were told not to fully load and compress the springs in the magazines long term because they would weaken and wear out. The spring steel springs in the PMAG were designed specifically for keeping fully loaded, an empty magazine is of very little use.

Hey! Have more questions about anything AR? Please join us at the AR 15 BuildersForum. It is the largest AR 15 Group on Facebook. We started the Facebook group years ago to help our fellow enthusiasts and customers get fast easy access to answers from real world users of AR 15’s not just from bloggers or marketing departments.